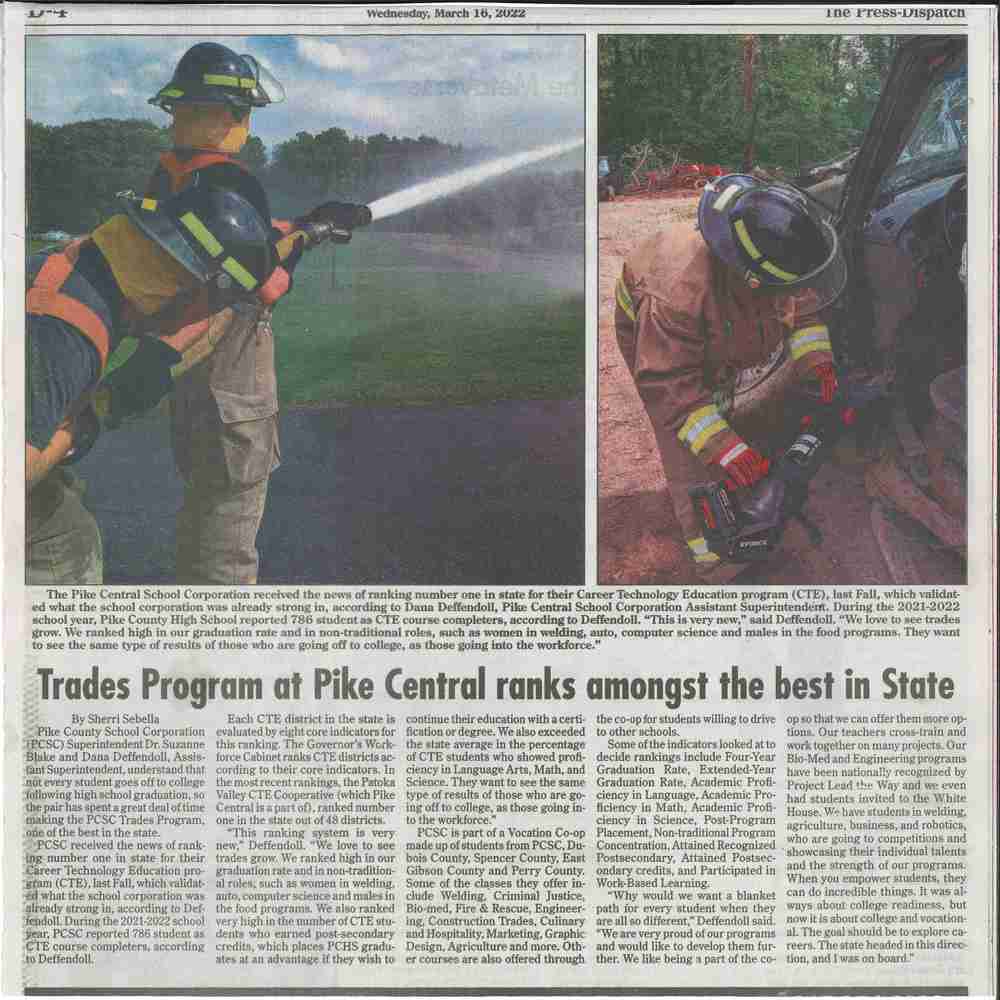 By Sherri Sebella of The Press-Dispatch

Article published in The Press-Dispatch 3/16/22, written by Sherri Sabella:

Pike County School Corporation (PCSC) Superintendent Dr. Suzanne Blake and Dana Deffendoll, Assis­tant Superintendent, understand that not every student goes off to college following high school graduation, so the pair has spent a great deal of time making the PCSC Trades Program, one of the best in the state.

PCSC received the news of rank­ing number one in state for their Career Technology Education pro­gram ( CTE), last Fall, which validat­ed what the school corporation was already strong in, according to Def­fendoll. During the 2021-2022 school year, PCSC reported 786 student as CTE course completers, according to Deffendoll.

"This ranking system is very new," Deffendoll. "We love to see trades grow. We ranked high in our graduation rate and in non-tradition­al roles, such as women in welding, auto, computer science and males in the food programs. We also ranked very high in the number of CTE stu­dents who earned post-secondary credits, which places PCHS gradu­ates at an advantage if they wish to continue their education with a certi­fication or degree. We also exceeded the state average in the percentage of CTE students who showed profi­ciency in Language Arts, Math, and Science. They want to see the same type of results of those who are go­ing off to college, as those going in­to the workforce."

PCSC is part of a Vocational Co-op made up of students from PCSC, Du­bois County, Spencer County, East Gibson County and Perry County. Some of the classes they offer in­clude Welding, Criminal Justice, Bio-med, Fire & Rescue, Engineer­ing, Construction Trades, Culinary and Hospitality, Marketing, Graphic Design, Agriculture and more. Oth­er courses are also offered through the co-op for students willing to drive to other schools.

"Why would we want a blanket path for every student when they are all so different," Deffendoll said. "We are very proud of our programs and would like to develop them fur­ther. We like being a part of the co-op so that we can offer them more op­tions. Our teachers cross-train and work together on many projects. Our Bio-Med and Engineering programs have been nationally recognized by Project Lead the Way and we even had students invited to the White House. We have students in welding, agriculture, business, and robotics, who are going to competitions and showcasing their individual talents and the strength of our programs. When you empower students, they can do incredible things. It was al­ways about college readiness, but now it is about college and vocation­al. The goal should be to explore ca­reers. The state headed in this direc­tion, and I was on board.''